Home » State of Permissionless and Permissioned Blockchains: Myths and Reality

State of Permissionless and Permissioned Blockchains: Myths and Reality

Abstract:
It has been a decade since the concept of blockchain was invented as the underlying core data structure of the permissionless or public Bitcoin cryptocurrency network. Since then, several cryptocurrencies, and associated concepts like tokens and ICOs have emerged. After much speculation and hype, significant number of them have become problematic or worthless, even though some countries have embraced them! The permissionless blockchain system Ethereum emerged by generalizing the use of blockchains to manage any kind of asset, be it physical or purely digital, with the introduction of the concept of Smart Contracts. Over the years, numerous myths have developed with respect to the purported utility and the need for permissionless blockchains. The adoption and further adaptation of blockchains and smart contracts for use in the permissioned or private environments is what I consider to be useful and of practical consequence. Hence, the technical aspects of only private blockchain systems will be the focus of my talk. Along the way, I will bust many myths associated with permissionless blockchains. I will also compare traditional database technologies with blockchain systems’ features and identify desirable future research topics. Extensive blockchain related collateral can be found here.

Speaker Bio:
Dr. C. Mohan is currently an IBM Fellow at the IBM Almaden Research Center in Silicon Valley and a Distinguished Visiting Professor at Tsinghua University in China. He has been an IBM researcher for 38 years in the database and related areas, impacting numerous IBM and non-IBM products, the research and academic communities, and standards, especially with his invention of the well-known ARIES family of database locking and recovery algorithms, and the Presumed Abort distributed commit protocol. This IBM (1997), ACM (2002) and IEEE (2002) Fellow has also served as the IBM India Chief Scientist (2006-2009). In addition to receiving the ACM SIGMOD Edgar F. Codd Innovations Award (1996), the VLDB 10 Year Best Paper Award (1999) and numerous IBM awards, Mohan was elected to the US and Indian National Academies of Engineering (2009) and named an IBM Master Inventor (1997). This Distinguished Alumnus of IIT Madras (1977) received his PhD at the University of Texas at Austin (1981). He is an inventor of 50 patents. He is currently focused on Blockchain, Big Data and HTAP technologies (http://bit.ly/CMbcDB, http://bit.ly/CMgMDS). For over 2 years, he has been an evangelist for permissioned blockchains and the myth buster of permissionless blockchains. Since 2016, Mohan has been a Distinguished Visiting Professor of China’s prestigious Tsinghua University. He has served on the advisory board of IEEE Spectrum, and on numerous conference and journal boards. Mohan is a frequent speaker in North America, Europe and Asia, and has given talks in 40 countries. He is very active on social media and has a huge network of followers. More information can be found in the Wikipedia page here. 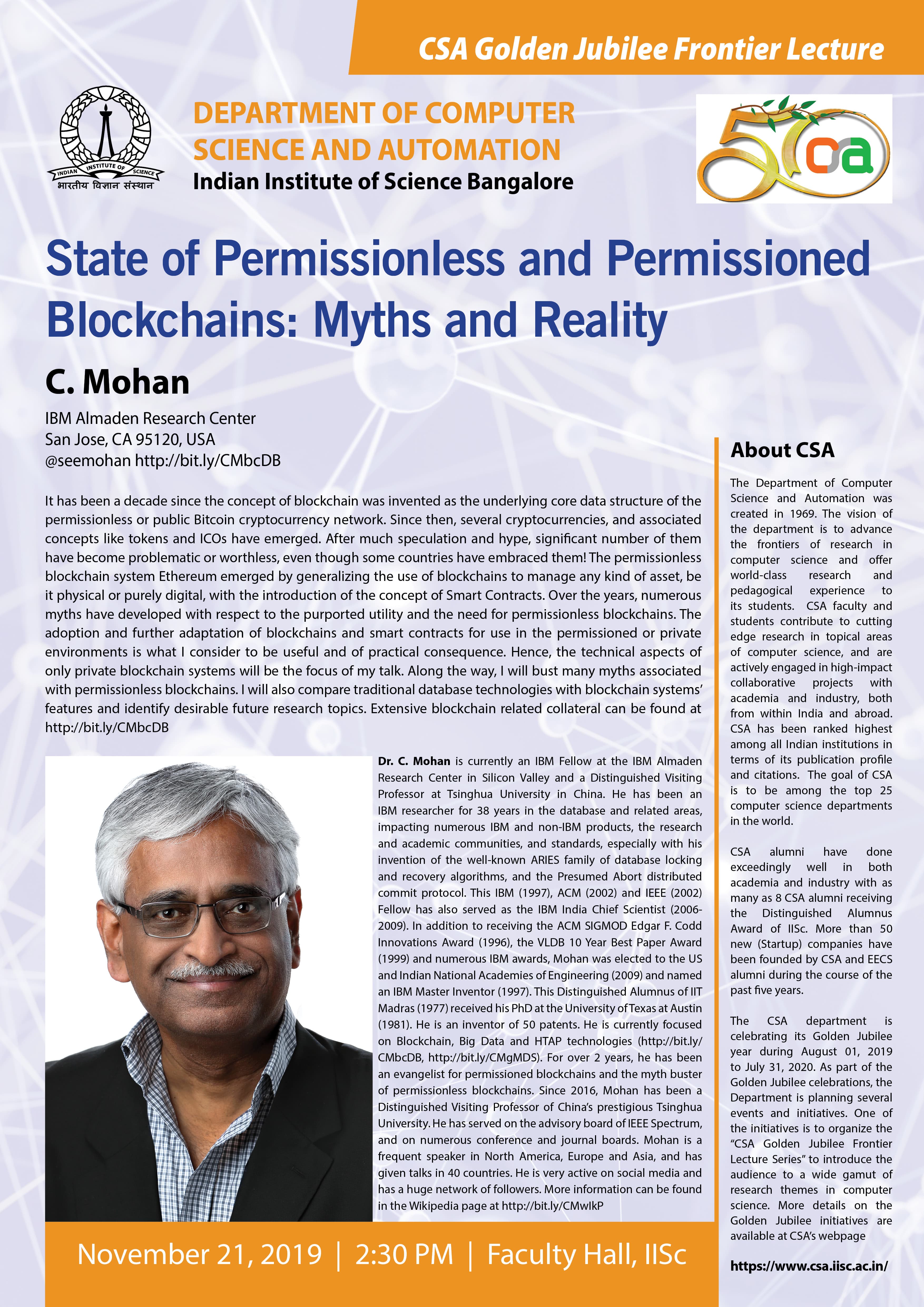