Abstract:
We address the classical multi-armed bandit problem, and. exhibit a family of scheduling policies that appear to have the best empirical performance compared to those known in the literature, as well as low complexity. We also establish regret bounds, both in expectation and on sample paths.
[Joint work with Xi Liu, Ping-Chun Hsieh and Anirban Bhattacharya].

Speaker Bio:
P. R. Kumar obtained his B.Tech. degree in Electrical Engineering (Electronics) from I.I.T. Madras in 1973, and the M.S. and D.Sc. degrees in Systems Science and Mathematics from Washington University, St. Louis in 1975 and 1977, respectively. From 1977-84, he was a faculty member in the Department of Mathematics at the University of Maryland Baltimore County. From 1985-2011, he was a faculty member in the Department of Electrical and Computer Engineering and the Coordinated Science Laboratory at the University of Illinois. Currently he is at Texas A&M University where he is a University Distinguished Professor, Regents Professor, and holds the College of Engineering Chair in Computer Engineering.
Kumar has worked on problems in game theory, adaptive control, stochastic systems, simulated annealing, neural networks, machine learning, queueing networks, manufacturing systems, scheduling, wafer fabrication plants and information theory. His current research focus includes renewable energy, smart grid, security, privacy, automated transportation, unmanned aerial vehicle traffic management, wireless networks, 5G, cyber-physical systems, control theory, information theory, stochastic systems, and operations research.
Kumar is a member of the National Academy of Engineering of the USA, the World Academy of Sciences, and the Indian National Academy of Engineering. He was awarded an honorary doctorate by the Swiss Federal Institute of Technology (Eidgenossische Technische Hochschule) in Zurich. He received the IEEE Field Award for Control Systems, the Donald Eckman Award of American Automatic Control Council, the Fred Ellersick Prize of IEEE Communications Society, the Outstanding Contribution Award of ACM SIGMOBILE, the Infocom Achievement Award, and a SIGMOBILE Test-of-Time Paper Award. He is an ACM Fellow and a Fellow of IEEE. He was a Guest Chair Professor and Leader of the Guest Chair Professor Group on Wireless Communication and Networking at Tsinghua University, Beijing, China. He is an Honorary Professor at IIT Hyderabad. He is a D. J. Gandhi Distinguished Visiting Professor at IIT Bombay. He was awarded the Distinguished Alumnus Award from IIT Madras, the Alumni Achievement Award from Washington University in St. Louis, and the Daniel C. Drucker Eminent Faculty Award from the College of Engineering at the University of Illinois. 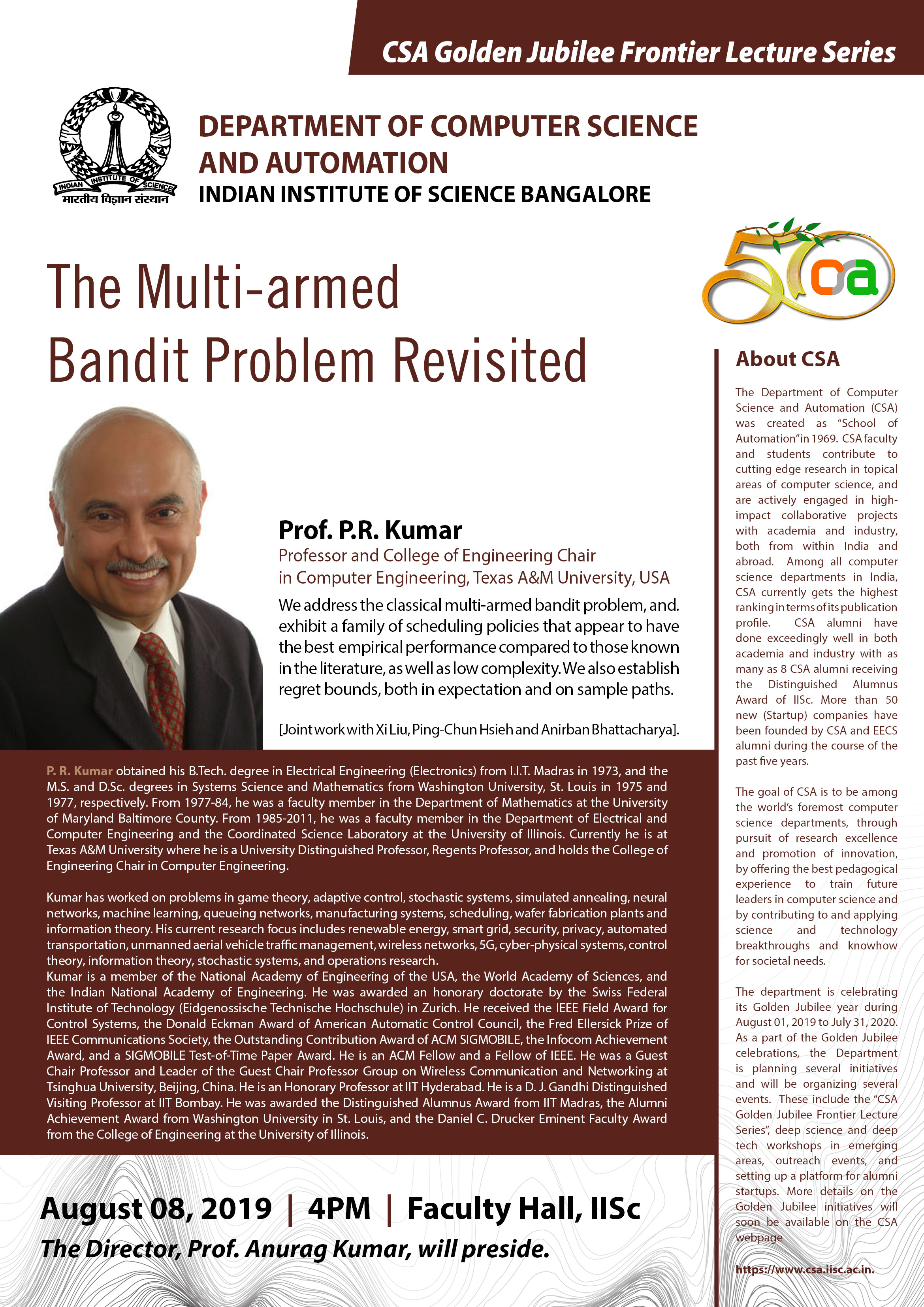