Home » Towards a Blend of Machine Learning and Microeconomics

Towards a Blend of Machine Learning and Microeconomics

Due to health reasons, Prof. Mike Jordan has to cancel his visit to Bangalore. Hence, the talk stands cancelled. Inconvenience caused is deeply regretted.

Abstract:
Statistical decisions are often given meaning in the context of other decisions, particularly when there are scarce resources to be shared.  Managing such sharing is one of the classical goals of microeconomics, and it is given new relevance in the modern setting of large, human-focused datasets, in data-analytic contexts such as classifiers and recommendation systems.  I’ll discuss several recent
projects that aim to explore this interface: (1) exploration-exploitation tradeoffs for bandits that compete over a scarce resource, (2) gradient-based algorithms that find Nash equilibria, and only Nash equilibria; (3) notions of local optimality in nonconvex-nonconcave minimax optimization, and how such notions relate to stochastic gradient methods; and (4) economic perspectives on online control of false-discovery rates.

Speaker Bio:
Michael I. Jordan is the Pehong Chen Distinguished Professor in the Department of Electrical Engineering and Computer Science and the Department of Statistics at the University of California, Berkeley. He received his Master’s in Mathematics from Arizona State University, and earned his PhD in Cognitive Science in 1985 from the University of California, San Diego. He was a professor at MIT from 1988 to 1998. His research interests bridge the computational, statistical, cognitive and biological sciences, and have focused in recent years on Bayesian nonparametric analysis, probabilistic graphical models, spectral methods, kernel machines and applications to problems in distributed computing systems, natural language processing, signal processing and statistical genetics.  Prof. Jordan is a member of the National Academy of Sciences, a member of the National Academy of Engineering and a member of the American Academy of Arts and Sciences.  He is a Fellow of the American Association for the Advancement of Science. He has been named a Neyman Lecturer and a Medallion Lecturer by the Institute of Mathematical Statistics.  He received the IJCAI Research Excellence Award in 2016, the David E. Rumelhart Prize in 2015 and the ACM/AAAI Allen Newell Award in 2009.  He is a Fellow of the AAAI, ACM, ASA, CSS, IEEE, IMS, ISBA and SIAM. 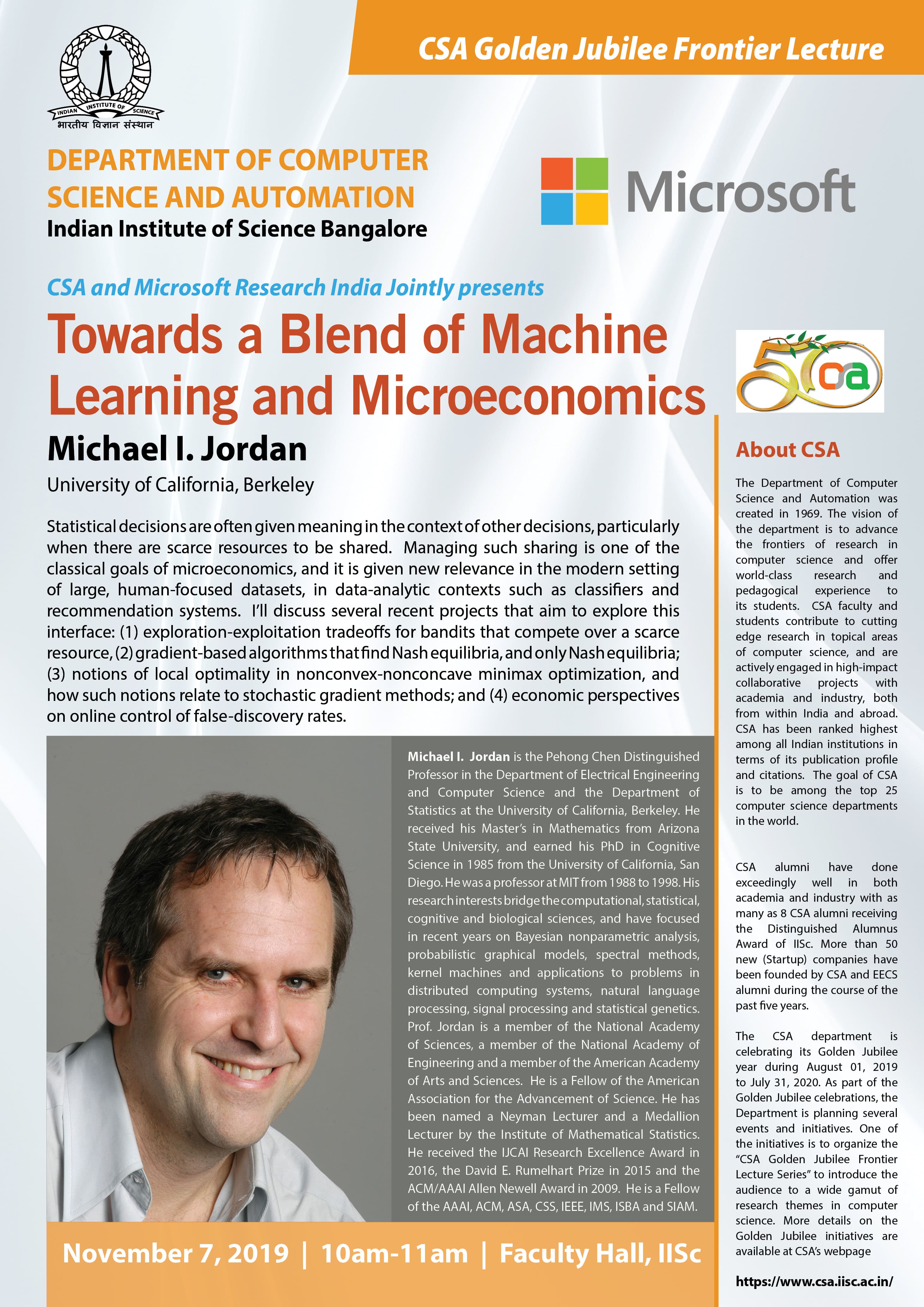