Ingrid Hotz received her M.S. degree in theoretical Physics from the Ludwig Maximilian University in Munich, Germany and the PhD degree from the Computer Science Department at the University of Kaiserslautern, Germany. During 2003–2006 she worked as a postdoctoral researcher at the Institute for Data Analysis and Visualization (IDAV) at the University of California. From 2006–2013 she was the leader of a research group at the Zuse Institute in Berlin Germany. From 2013–2015 she was the head of the scientific visualization group at the German Aerospace Center (DLR). Since 2015 she is a Professor in Scientific Visualization at the Linköping University in Scientific Visualization and has an affiliation with the Center for Medical Image Science and Visualization (CMIV) in Linköping.

CSA Welcomes Prof. Sumit Mandal, who has joined as an Assistant Professor

Murali Annavaram is the Dean’s Professor in the Ming-Hsieh Department of ECE and CS (joint appointment) at the University of Southern California. He is also the Founding Director of the REAL@USC-Meta center, and the architecture thrust leader for the NSF DISCoVER Expeditions center. He is currently the Rukmini Gopalakrishnachar Visiting Chair Professor at the Indian Institute of Science (IISC) for the 2022-2023 academic year.  He held the Robert G. and Mary G. Lane Early Career Chair at USC until 2018.  His research is focused on energy efficient computer system design through heterogeneity, secure and private computing for machine learning systems, and  superconducting processor designs.  His research had direct impact on 3D stacked processors, EPI throttled systems such as Turbo Boost,  power efficient GPU server architectures, and privacy preserving traffic sensing using mobile devices. In collaboration with his IISC colleagues he plans to explore the novel hardware architectures and runtime systems for efficient execution of a diverse range of ML algorithms, going beyond the traditional matrix-algebra accelerators. He also plan to explore approaches to leverage superconducting CPUs as  qubit controllers for quantum computing.

Murali received the NSF CAREER award, IBM Faculty Award, Samsung Faculty Award, Meta’s Featured Research Academic of 2022 award. He received the Stevens Institute’s Innovation Inside curriculum award.  For his wide range of contributions to computer architecture, he has been inducted to the hall of fame for three of the prestigious computer architecture conferences ISCA, MICRO and HPCA. He served as a Technical Program Chair for HPCA 2021, and served as the General Co-Chair for ISCA 2018. Murali co-authored Parallel Computer Organization and Design, a widely used textbook to teach both the basic and advanced principles of computer architecture. Murali received the Ph.D. degree in Computer Engineering from the University of Michigan, Ann Arbor, in 2001. He is an IEEE Fellow and senior member of ACM.

Prof. Arpita Patra has won the JP Morgan Faculty research award. This is noteworthy because it is highly selective and a globally competitive award.

Since August 2021, Prof. Chandrasekaran Pandu Rangan is hosted in the Department of CSA as Professor Satish Dhawan Visiting Chair Professor. His primary areas of interests are Algorithms and Cryptography.
Prof. Pandu Rangan served as Venky Harinarayanan Anand Rajaraman Chair Professor in the Department of Computer science and Engineering, IIT, Madras, Chennai, India until his superannuation in July 2021. 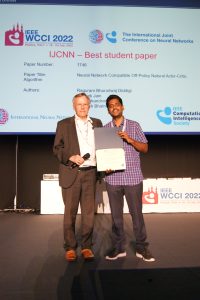 Congratulations to Dr. Arkaprava Basu for being promoted to Associate Professor. This is a fast-track promotion.

Congratulations to Prof. Uday Reddy for being awarded the Mindtree Chair position in recognition of his stellar academic achievements.

Mindtree Creates Endowment for Associate Professor Chair in the Division of EECS.

Mindtree Partners with the Indian Institute of Science Bangalore to advance research in Artificial Intelligence.

Congratulations to Rishikesh Gajjala and Sruthi Gorantla, Ph.D. students at CSA, on being selected to attend the 9th Heidelberg Laureate Forum.

Congratulations to Prof. L. Sunil Chandran, and Rishikesh Gajjala for winning the 1.000 Euro Best-Paper Award for their work on “Perfect Matchings and Quantum Physics: Progress on Krenn’s Conjecture”. They confirm a graph-theoretic conjecture arising from quantum physics due to Mario Krenn for large classes of simple graphs. They also introduced and disproved a natural generalization.

Congratulations to our faculty, Arkaprava Basu, Chaya Ganesh, and Arindam Khan, for receiving Google India Research Awards 2021. Notably, out of the nine awards in India, three are from CSA.